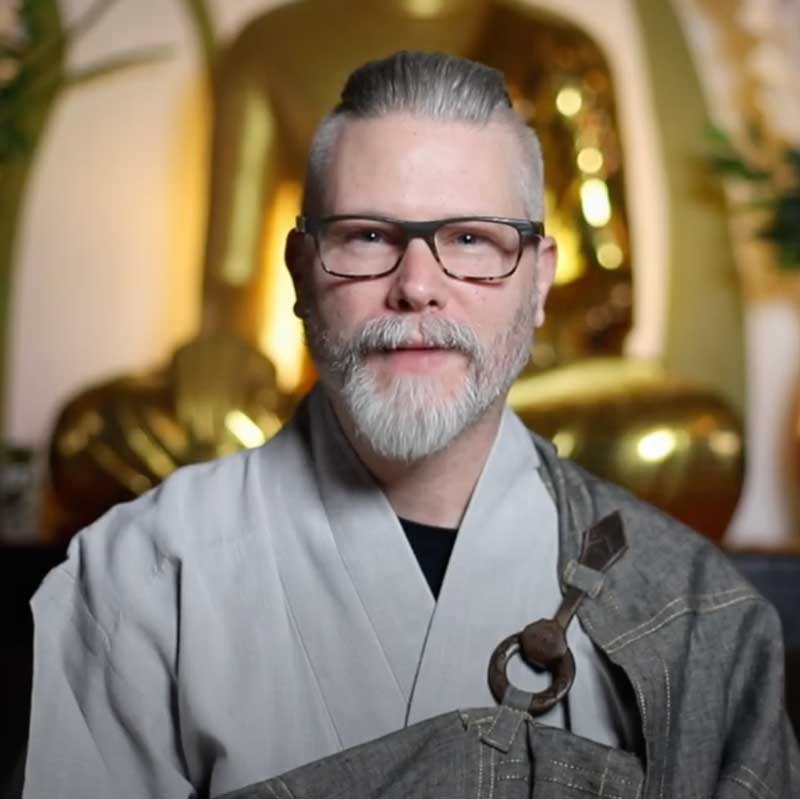 Venerable Hoden was ordained as a Samanera (monk) at Seonamsa Monastery in 2010 and as a Bhikkhu in 2016 in Seoul, Korea. He has been studying and practicing Zen, Buddhism and Martial Arts for over 35 years. He currently acts as Abbot and Guiding Teacher for Dharma Gate Zen, teaching Western Zen (from Japanese and Korean Zen influences) along with being the Head Instructor of Homoni Iaido (Japanese sword arts).

Hoden Sunim was previously the Vice Bishop for the Taego Overseas Parish. He also holds a fifth degree in Tamiya Ryu Iaijutsu and was previously a licensed instructor in Japan (Shihandai), and branch manager (for both the Birmingham and Clarkston branches of USTRI). He received a pseudonym in the Tamiya Ryu Iaijustu Lineage from the head of the Genwakai organization who presented him with the name “Gento”. Hoden graduated Summa Cum Laude with a Bachelor of Fine Arts degree from Marygrove College in Detroit, and an Associates Degree in Buddhist Studies from Dong-Bang Seminary, South Korea. He is the author of “Walk: A contemporary guide to the eightfold path” and “Awake: A contemporary guide to you” 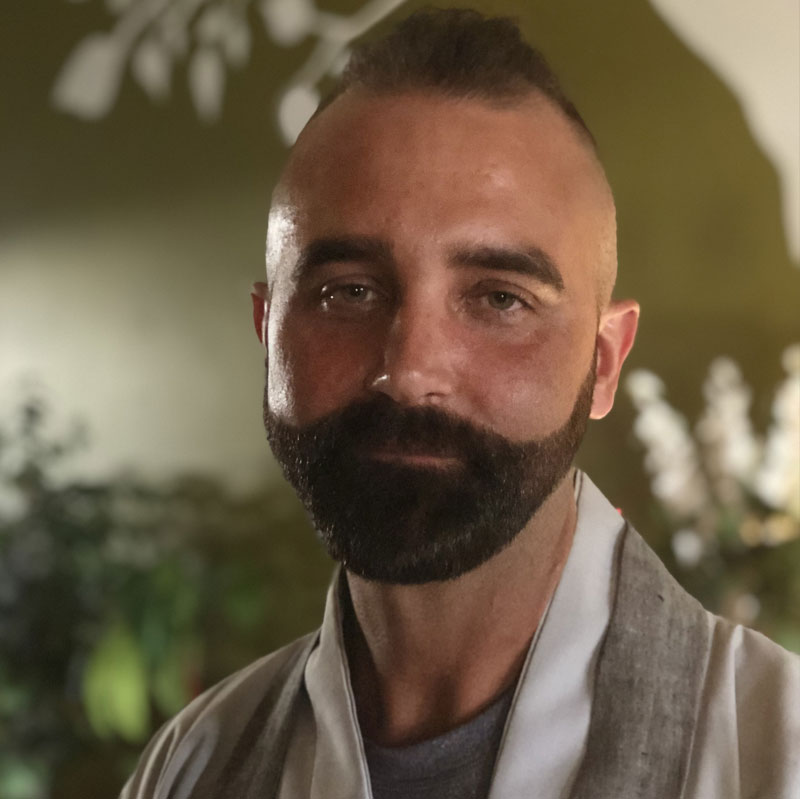 Reverend Kogen is an Executive Chef. He was born in Garden City, Michigan but grew up in Clarkston. He attended The Culinary Institute of America in Hyde Park NY. Graduated with a Bachelors in Culinary Arts and restaurant management. His path includes overcoming addiction through the implementation of Buddhist path as the core of a program to lead a fulfilling and sober life. He also is involved and is one of our leaders for the Refuge Recovery program at DGZ, Cross Fit and martial arts, including Aikido, Ryukyu Kempo and Homonji Iaido. 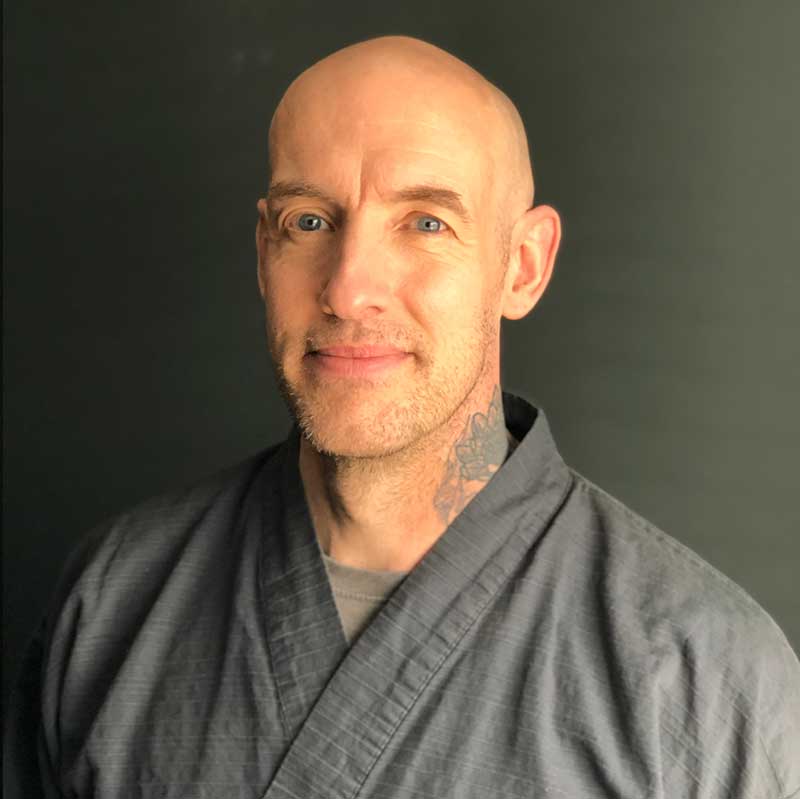 DaeJih is one of the original members of Dharma Gate Zen. Initially exposed to Zen Buddhism as a college student, he now works as a professor at Oakland University where he teaches, among other things, the sociology of religion. He moved to Michigan 10 years ago and currently resides in Royal Oak with his wife and three cats. 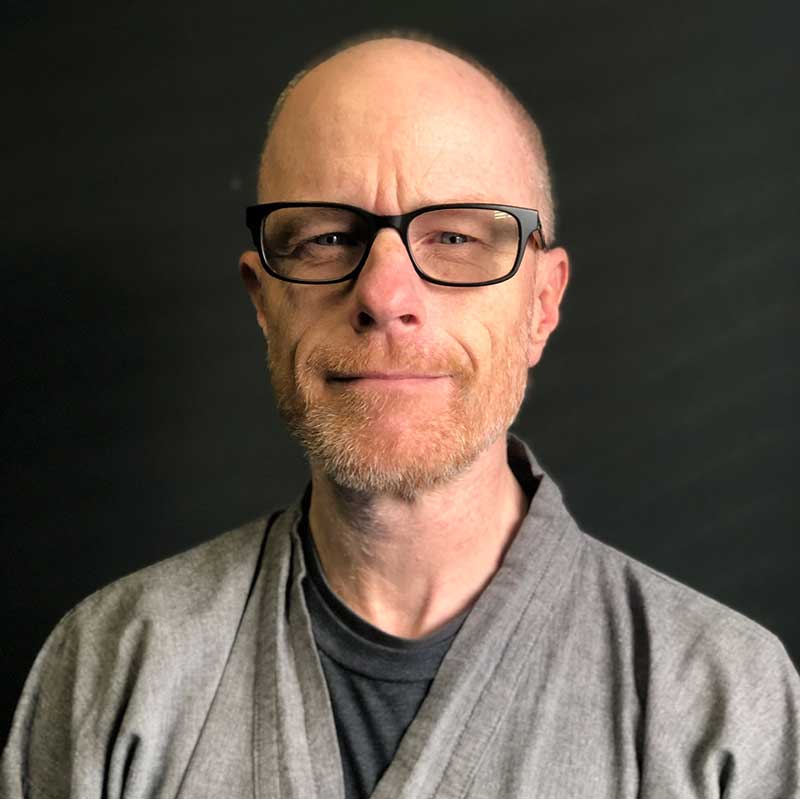 SenJu was born in Royal Oak, Michigan but grew up all over the Midwest. He works as a Creative Director in the advertising industry. He began practicing Zen in 2017. In 2019 he started in the Dharma Worker program at DGZ. 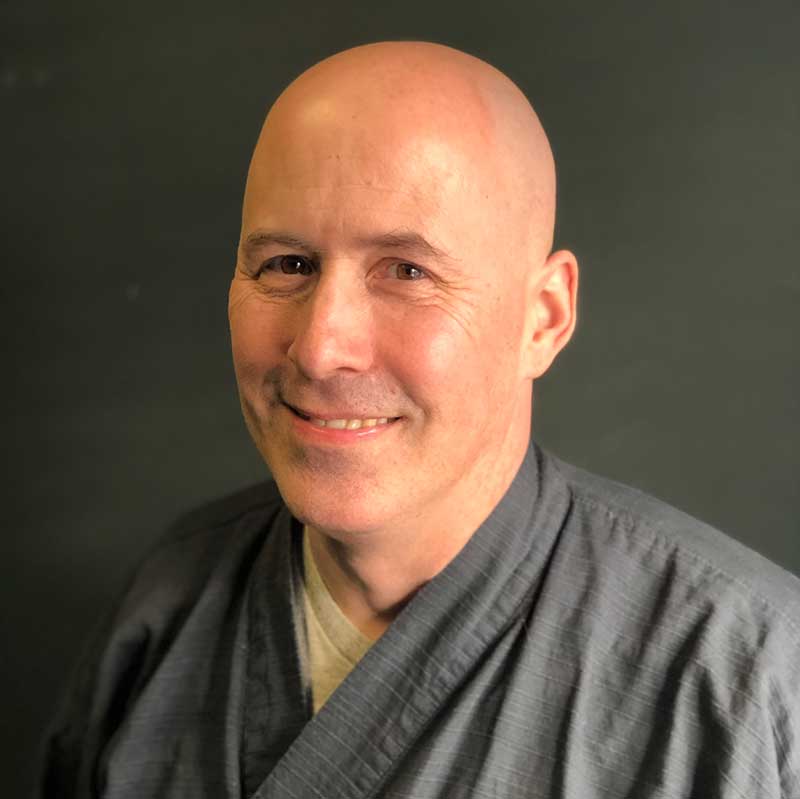 Wonrim was born in Flint Michigan and lives with his family in Berkley Michigan. He is a graduate of the Center For Creative Studies and works in digital media as a profession. Wonrim is a Dharma worker at Dharma Gate Zen and guides DGZ Tuesday evening meditations. 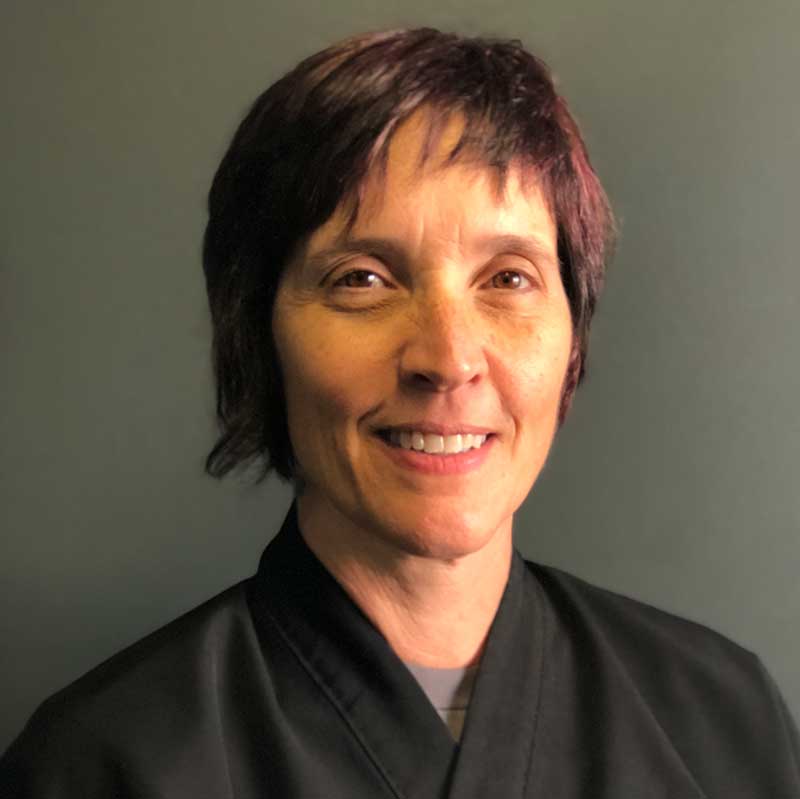 Sifonis Sensei works as an instructor in our Homonji Iaido classes where she is currently ranked as Shodan (1st degree). She has practiced various “soft” and “hard” style martial arts over the last 20 years. In 2006, she began studying Tamiya Ryu Iaijutsu, where she holds the rank of Yondan (4rd degree). She is currently an associate professor of cognitive psychology as well as the director of the new Bachelor of Liberal Studies program at Oakland University. She received her Ph.D. in 1998 from Texas A&M University received further training in Cognitive Science at the Beckman Institute at the University of Illinois, Urbana-Champaign 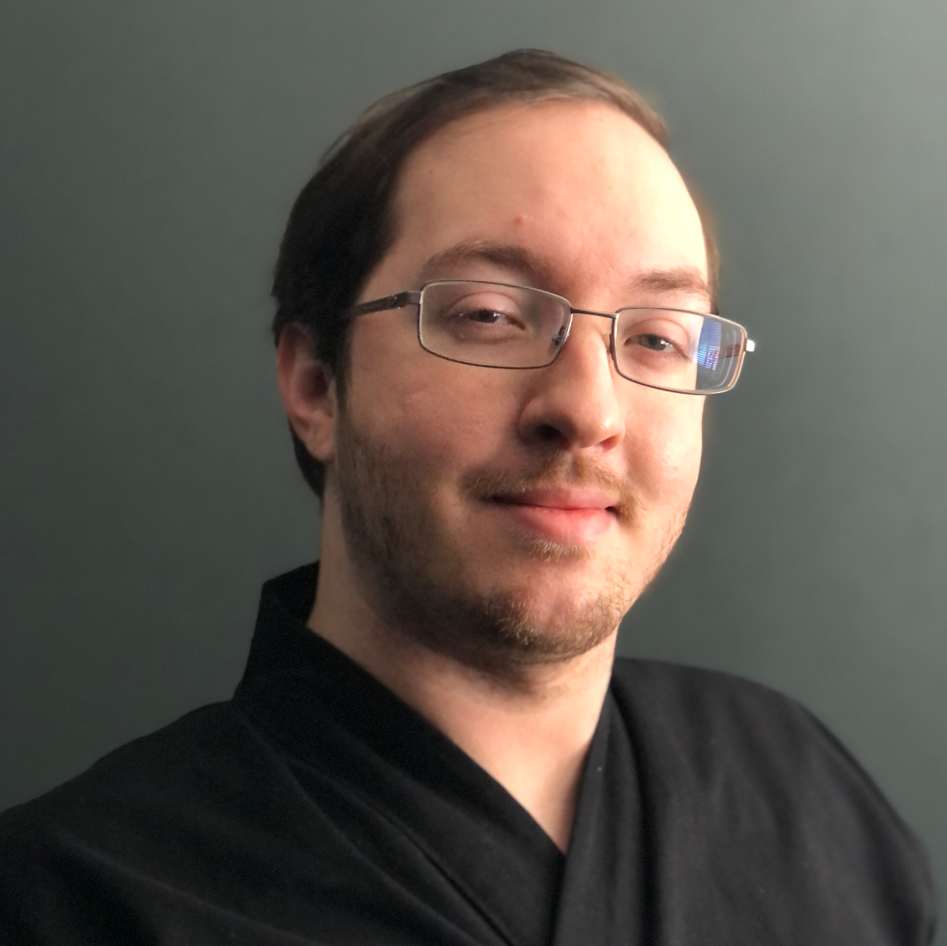 Holter Sensei (Shodan) studied iaijutsu for two years at the Clarkston Tamiya-Ryu Iaijutsu dojo, and has been continuing to study under Homonji Iaido since 2015. In 2012 he graduated from Oakland University with a major in French and a minor in Japanese language and history. Outside of Dharma Gate he spends free time playing video games and collecting manga, and has a difficult time writing bios about himself. 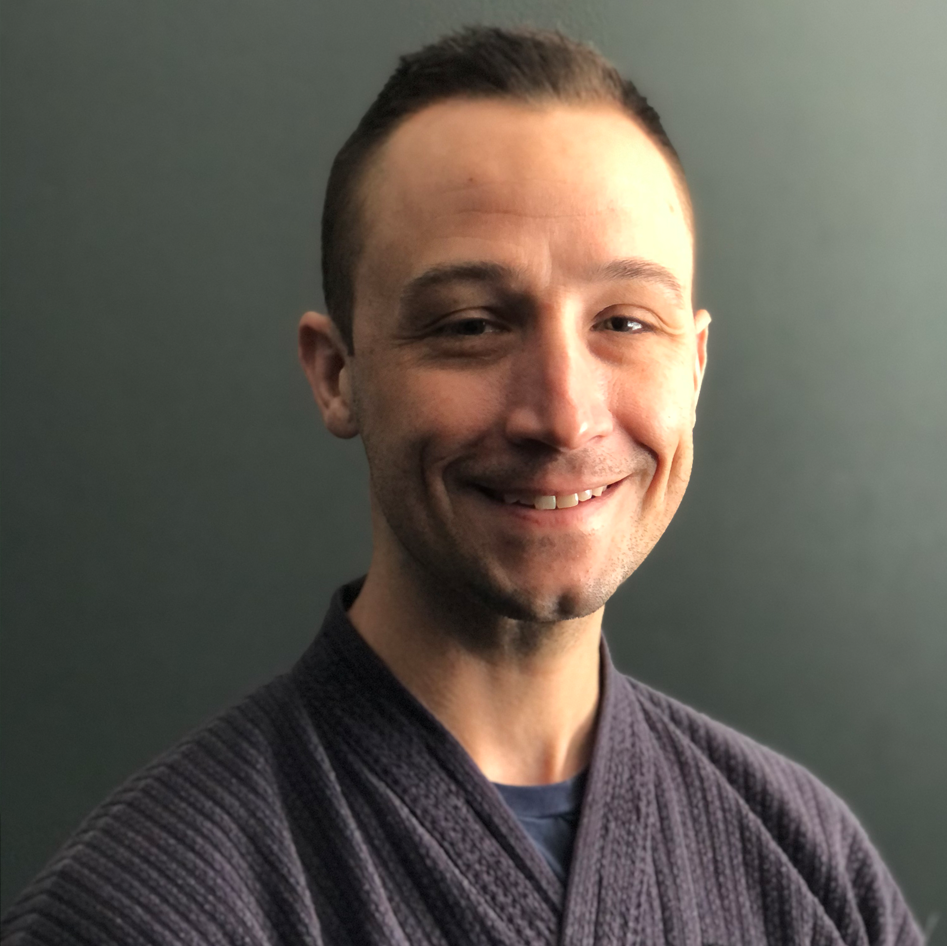 Davis Sensei is a loving husband and dedicated father that currently works as an instructor in our Homonji Iaido classes - where he is currently ranked Shodan. He is owner and director of Dynamic Martial Arts in Shelby Township, where he operates a satellite branch of the Homonji Iaido system. Davis Sensei has studied a variety of martial arts, including Shorinji Ryu Karate-Dō, Kobudo, Tai Chi Chuan, Aikido, and Modern Arnis. In addition to studying Iaido under the supervision of Hoden-Sensei, he is a member of the Zen Bei Butoku-Kai International and loyal student to Sensei Brian Ricci (Boston, MA). He looks forward to the opportunity to share his humble understanding of martial arts with all.